Skip to content
Every ethnic group has certain predisposed notions of what ideal beauty is based upon their own genetic make up and cultural ideals. Cultural ideals are influenced by trends and therefore can change over the years (think of the beauties depicted in Ruben’s paintings). In terms of Kim Kardashian‘s genetic make up, she is partly Armenian and represents for many an ideal version of female pulchritude. Unfortunately, she is depicted on the cover of myriad top-tiered magazines as a cartoon representation of bottom-heavy female beauty and sexiness. The cover of Paper is no exception. Here, she has been clearly “Photoshopped” to exaggerate her waist-to-hip ratio and smooth out the buttock cellulite she most certainly possesses. In this case, add oil for good measure to flame some pubescent boy’s fantasy. She may have had one or more fat transfers to accentuate her already full bottom (which may or may not show up on x-ray as microcalcifications) but, who cares? This would all be harmless titillation were it not for the fact that many unsuspecting women will be easily influenced to attain their own version of Kim’s voluminous buttocks. Don’t get me wrong-I am the first to appreciate an hourglass figure and a well-balanced full bottom to complement a woman in-and-out of clothes. But full is different than big which in turn is different from a comic-book-big butt of a centaur. 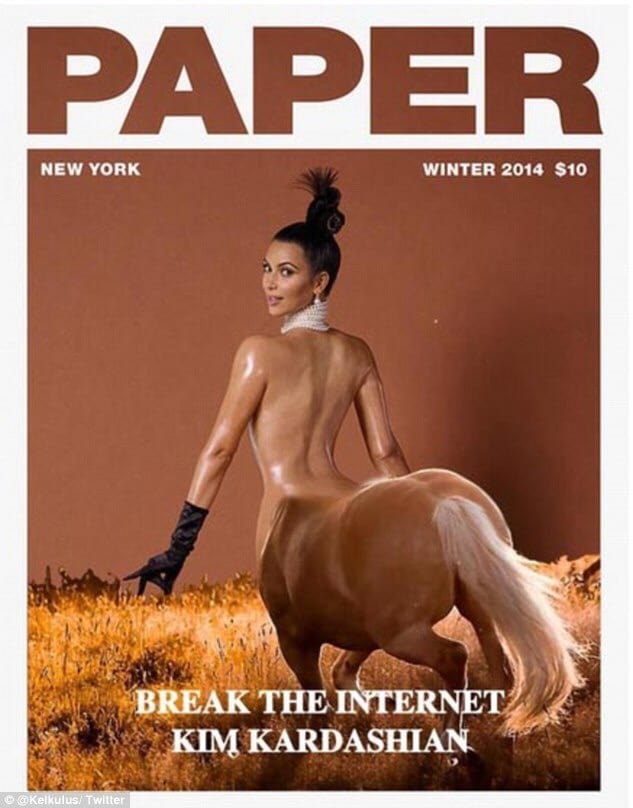 Often times buttock enhancement procedures may lead to immediate or even long-term disastrous consequences. Buttock augmentation can be performed with silicone implants, fat transfer, or injections with man-made substances ranging from PMMA to free silicone or other illicit compounds found in back alleys or mechanic shops. Buttock augmentation with silicone implants is generally considered a safe procedure but has a higher rate of infection as compared with other implants in the body and the results often feel unnaturally hard. I perform fat transfer which is very safe but the patient must have a enough fat to transfer in order to make the result a meaningful one. I am not a proponent of injecting free silicone or other man-made substances because of their inherent danger in terms of disfigurement and possible death. One must remember that we do not know of the long-term consequences of having such outrageously enhanced buttocks in regards to how they will look and droop as the patient ages. Drooping buttocks is a very difficult problem to treat for the plastic surgeon and the only solution would be a butt lift. Unfortunately, most buttock lifts produce mediocre results with unsightly scars. Contrast this to a breast lift, the result of which is often spectacular with minimal scarring. Those contemplating injections and other forms of untested ways to augment their derrière must do their homework and be prepared to roll dice. One must remember that even though one may not experience immediate complications, one must consider the long-term effects of having an extra 2 to 4 pounds of added junk in your trunk.