In an interview with Daily Mail Australia, Dr. Haworth has offered his expert opinion on whether the Married At First Sight star has gone under the knife.

Beverly Hills Plastic Surgeon Dr. Haworth believes Ashley Irvin has had some subtle work done on her face and chest. She sparked rumors about a possible breast enlargement after putting on a busty display at the Logie Awards on Sunday. 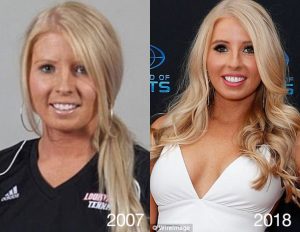 ‘The faint circular ridge bordering the upper portion of her breast strongly suggests the presence of a breast implant’ he said.

Dr. Haworth concluded by saying the aforementioned procedures may not be Ashley’s ‘only foray into the world of plastic surgery’.