Dr. Randal Haworth, told Daily Mail Australia on Tuesday that he believes the rapper, could have made additional changes to her facial shape. Haworth, who has not treated Iggy himself, stated that the Australian musician appears to have invested in some ‘subtle‘ and ‘beautiful’ refinements. ‘Iggy is what I would describe as an excellent “canvas” on which a plastic surgeon can reveal his work,’ he says. Iggy Azalea’s striking appearance may be the result of further cosmetic procedures, according to Dr. Haworth. 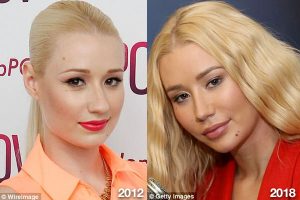 ‘When done right, results can be sublime and indiscernible to a layman’s eye. In the absence of rare complications, less surgical work is needed to create the beautiful, yet subtle, results as exemplified by Ms Azalea – while a less-than-average surgeon could draw unwanted attention to an anatomical “flaw” which only makes things worse.’

In addition to Iggy’s rhinoplasty, which ‘straightened and narrowed her nose’, Dr. Haworth believes she may have undergone ‘a chin augmentation as well as mandibular angle enhancement to give her a more refined, “modelesque” jawline’.