You know a cosmetic procedure has reached its tipping point when it takes on verb status and starts casually turning up in conversations–e.g., “Can’t go to Barneys today, I’m getting Botoxed this afternoon.”

Or, as Santa Monica-based therapist Betsy Cantor says, “The last time I Fraxeled was a little over a year ago. Afterwards, people wondered what was different, like I went on vacation or lost weight.” So what’s Fraxel? Basically, a next-gen laser treatment that bypasses skin’s top layer and works only on the deeper dermis, thereby eliminating the breakage traditional lasers cause. It tums out Cantor, 51, was on the forefront of a wave of youth-seekers now turning to Fraxel to get their skin as smooth as a baby’s butt.

Wait-list-only celebrity plastic surgeons like BevHills’ Randal Haworth (he’s the handsome gent on The Swan) and the Westside’s Grant Stevens report that Fraxel has become one of the most requested procedures among their paparazzi-stalked patients-including men and those as young as thirtysomething-who try everything short of skin transplants to keep wrinkles and age spots at bay.

“We’ve worked Fraxel around photo shoots and film shoots,” says Stevens, the medical director of the Plastic Surgery Associates centers in Palos Verdes and Marina del Rey who also teaches at USC and UCLA.”I guarantee that you’ve seen the effects [of Fraxel] on the red carpet. The last time I saw this level of enthusiasm was when Botox was new.”

Both Haworth and Stevens say Fraxel’s breakthrough is in its ability to deliver the results of a traditional laser without the usual downtime. Typical C02 lasers sandblast the entire face, leaving patients ooze-y for at least 12 days and pink for up to two months, according to Stevens. “It’s like scraping your knee as a kid. Fraxel is like drilling little tiny holes that aren’t visible to the naked eye. We’re able to target only the areas that need it.” (Or fractional parts of the skin, ergo the name Fraxel-get it?) The docs say downtime can be as little as two days of looking blotchy and ruddy. But Cantor’s experience was a bit more intense:”It felt like a bad sunbum-blotchy, redness, a little peeling-for about two to three days. I would say it took about a week for my skin to completely, 100-percent heal.”

Additionally, Fraxel allows for treatment on patients with more pigmented skin like Asians, Hispanics and African Americans. ”You can’t use C02 with darker skin,” Haworth says. “It can cause problematic discoloration, where the skin actually gets darker.” The neck, decolletage and tell-all hands can also be zapped with Fraxel, whereas C02 is face-only. Stevens has even started using the new technology to improve the appearance of stretch marks. He’s found that Fraxel helps fill in and lessen the depth’ of the pesky pocks, thanks to its collagen-stimulating action. But Fraxel has built its buzz primarily on wiping out wrinkles and age spots-and word starts to spread fast when celebrities are involved. “We’ve got a patient, a pretty major actress, who’s always saying the paparazzi are cruel to her,” Haworth says. “She wanted to try to get three Fraxels in three weeks. I told her you can’t do that; you have to separate them by at least a few weeks. Later, I found out she was calling other physicians and lying about her treatments, trying to get all three in three weeks.” 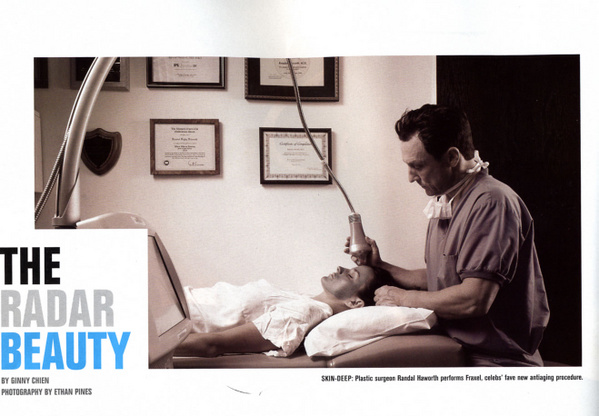 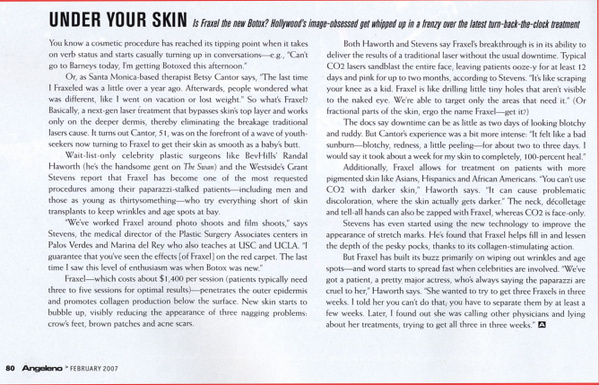