Skip to content
Skin resurfacing. As recently as two years ago, laser resurfacing was all the rage as a means of eliminating acne scarring, blasting fine lines away and erasing dark spots from sun damage. Today, doctors have cooled on it a bit, if only because it involves considerable recovery time and could produce scary side effects: The laser has to destroy the outer layers of skin in order to encourage new skin growth and higher collagen production. “If the patient is not prepared, it’s very tough,” Shuster says. “His skin is going to peel off.”

Certainly there are cases in which laser is the way to go, especially when the patient can manage to stay out of sight for a couple of weeks after treatment. But the current preference is for light chemical peels, micro-dermabrasion and gentle laser sesions. While the particulars vary, the common approach is multiple lesser-intensity visits that produce a cumulative results. “You undergo a series of seven to 10 sessions,” Haworth says, speaking specifically about the sand-blast method of micro-dermabrasion, “and they act like one longer procedure.”

Facial surgery. All the same, going under the knife can still be an option of last resort. Any of the procedures already mentioned, including Botox and fat injections, work well on older patients. And small surgical procedures a little nip and tuck under the eye or along the jawline will go a long way toward making a man look more rested and healthy. The closest that most men come to the full tug-which doesn’t have many proponents these days anyway- is either the modified facelift or the so called unified-incision facelift, the latter a procedure that Imber helped develop. In the modified lift, the surgeon simply goes for less radical results. In the unified procedure, the surgeon makes a short cut in front of the ears and through it tightens the skin of the face-but not, as in a traditional full facelift, the skin of hte forehead.

A facelift is typically accompanied by a lift of the skin on the neck, to keep skin tone consistent. Haworth is enthusiastic about a new type of necklift in which the surgeon runs a Gortex sling from the tough tissue behing one ear underneath the neck and around behind the other ear. “It redefines the neck remarkably,” he says. “It not only addresses loose musculature, it also redirects the skin upward. After the patient looks like he’s just come back from a great ski vacation. 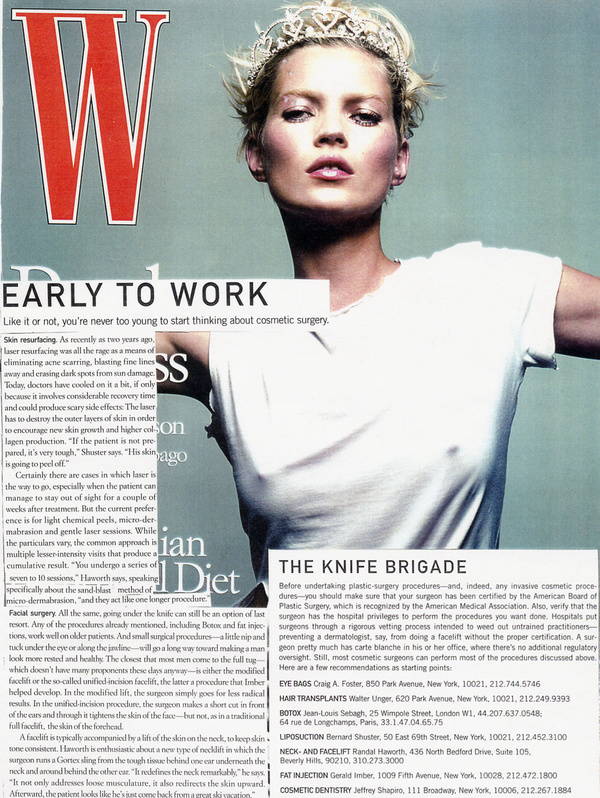