Randal Haworth, MD, a Beverly Hills plastic surgeon, always had a bent toward art. Ever since he was a child, he drew and painted everything from flowers to fancy buildings. But when he told his parents he wanted to be an artist, they weren’t having it.

“I was an only child and my parents were war babies from World War II,” says Dr. Haworth. “My mother was living in Holland and my father was living in England at the time of the German invasion. They wanted one of their children to be a physician. Basically, they said to me, ‘Randy, you are going to pursue medicine or else.'”

Today, Dr. Haworth is the owner of Beverly Hills Surgical Center Inc. on Bedford Drive. He is a pioneer in the field of plastic surgery, specializing in both reconstructive and aesthetic procedures. However, Dr. Haworth hasn’t abandoned his artistic interests. In fact, he considers himself an artist who has become a doctor.

“I was raised in England, and I remember seeing a program on the BBC about plastic and reconstructive surgery,” Dr. Haworth says. “At that moment, it struck a chord within me even at the age of 13, that I would be able to combine my curiosity for science with my bent toward art and satisfy both through the synthesis.”

A trailblazer, Dr. Haworth has developed procedures for breast and lip enhancements and mid-face lifts utilizing Endotine B. His technique in natural, permanent lip augmentation, utilizing the patient’s own tissue, won him an esteemed plastic surgery research prize at UCLA in 1995.

Just as Dr. Haworth is artful with his scalpel, he remains innovative with his paintbrush. In 2000, he launched “Memories Lost,” an art exhibit at the BGH Gallery/ Bergamot Station in Santa Monica. The body of work comprised photorealistic graphite drawings of missing children and adults. His new series, titled “Iconography,” focuses on modern culture through anachronistic figurative images rendered in acrylic on canvas. This exhibit was shown at the Karen Lynne Gallery in Beverly Hills in November 2006. Another engagement is planned in Boca Raton, Fla., in early 2007.

He has no formal education in art, but his medical credentials are top notch. Dr. Haworth earned undergraduate degrees in chemistry and biology from the King’s School in Canterbury, England, the oldest boarding school in the world. He performed his medical training at USC and completed his five-year general surgery residency at The New York Hospital Cornell Medical Center. In 1993, he returned to the West Coast to serve as chief resident in plastic and reconstructive surgery at UCLA Medical Center, gaining extensive experience in the subspecialties of aesthetic, micro, pediatric and hand surgery.

Dr. Haworth has not limited his service to patients at these prestigious institutions. For the past few years, he has been providing charity care, donating his time and skills to patients in the Middle East and Asia.

It all started when he was featured on the reality television show on FOX called “The Swan.” Launched in 2004, the show featured a team of medical professionals who physically transform women competing in a beauty contest.

“When ‘The Swan’ aired worldwide, physicians working at the Taiba Clinic in Kuwait City saw me on the show,” Dr. Haworth says. “Because of my plastic surgery expertise, they asked me to perform several reconstructive surgeries for them.

“At the time, the Iraq War was pretty fresh and Americans were very paranoid. We were still seeing videos of New York Times reporter Daniel Pearl being held captive by militant groups on television. I wanted to volunteer my medical services to the Taiba Clinic, but I had a great degree of trepidation about going over there.”

Despite his uneasiness, Dr. Haworth went. And he was surprised at what he found.

Kuwait City is a very Westernized town, boasting more Starbucks Coffee locations per capita than any other place in the world. And the people: friendly and generous.

“I saw a tremendous amount of birth defects, car accidents and trauma, some of which were beyond the expertise of the Taiba Clinic,” Dr. Haworth says. “Many of these heavy cranial-facial defects or deformities require a multidisciplinary approach that is beyond the skill set of a single physician trained in cosmetic surgery.”

Since his first trip in 2004, Dr. Haworth has returned to the Middle East four times, performing reconstructive surgeries on patients with deviated noses and other deformities. He has also expanded his charity care to Asia, fixing cleft palates and cleft lips in Thailand.

“[My charity care] is not a life-sapping sacrifice: I don’t have to flog myself to do this,” Dr. Haworth says. “I do it as a way to reconnect with myself and remember why I decided to go into medicine in the first place. When physicians give to the community, we’re doing it because we ourselves get some form of gratification from it. So in a way, when you look at it from an existential standpoint, it is a little bit of a selfish thing.” 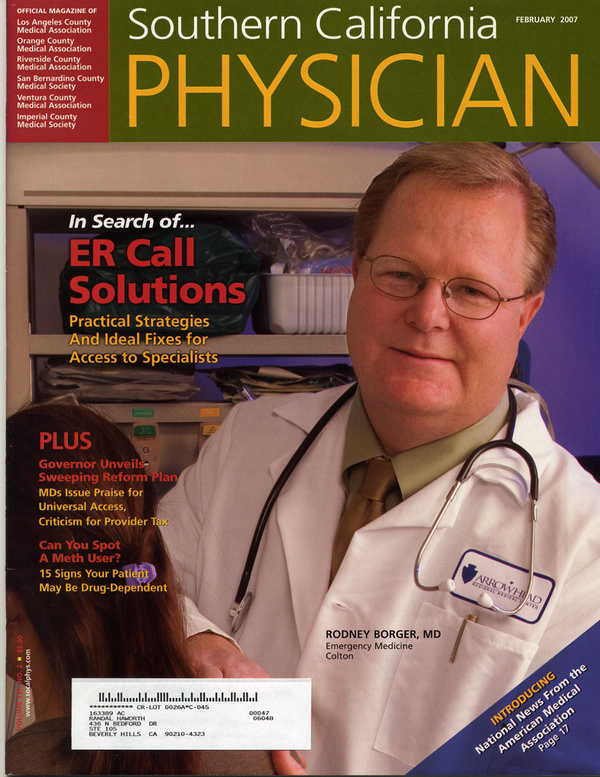 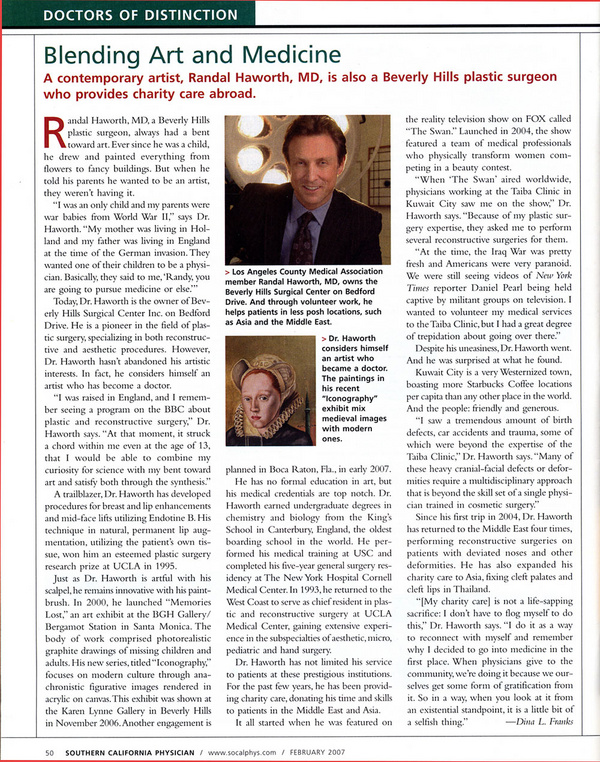