The latest plastic surgery reality show to hit screens, The Swan , has captivated audiences worldwide with its touching tales of transformation. Putting a new spin on the genre, which was cultivated by cult show, Extreme Makeover, The Swan takes self-proclaimed ‘ugly ducklings’ and gives them the opportunity to spread their wings as they all compete for a place in the much coveted Swan Beauty Pageant. “It’s really a beautiful thing,” says Dr Randal Haworth, plastic surgeon on the show. “The reason I do what I do is because I love to see how I can change someone’s life through physical changes.”

An innovator in his field and an authority on plastic and reconstructive surgery, it’s little wonder that Dr Haworth now counts himself among the panel of experts involved on hit show, The Swan . A successful practice in Beveriy Hills and a celebrity client list as long as your arm usually keeps the Californian-born surgeon busy, but on a recent trip to Dubai he took time out of his hectic schedule to catch up with HELLO! to talk tummy tucks, TV appearances and why he loves the ever-changing face of Dubai.

What brings you to Dubai?
“My trip here is a mixture of business and pieasure . Basically I was invited to Kuwaii some time back for work. The adventurer in me sensed the potential in the area so I came out to explore the region. Because I have a Kuwaitii licence, I’ve been able to practice and the response to my various trips has been overwhelming. On a recent visit it was announced nationally that I was coming and about 140 people responded. In the end I operated on 2S people in eight days. That trip gave me some insight into the area and I was really impressed by the hospitality of the locals. I hate the cliche, but it was really refreshing to meet normal people – kind of like returning to my roots.”

What are you first impressions of Dubai?
“First of all it’s totally overwhelming. It reminds me of when I first moved to New York as a young man. With the skyscrapers and the various other architectural projects, the sense of enormity is amazing. What I found even more overpowering was when I heard that a little over 18 months ago, a lot of this was desert. I guess the best way for me to describe Dubai would be a mix somewhere between Las Vegas and New York, on steroids, but with slightly better taste.”

Dubai currently has a massive plastic surgery following and there are a lot of clinics popping up all over the city. Why do you think that is?
“In simple terms I think it’s about people wishing to customise their lives. Just one example would be home design – there has never been a bigger interest in interior design. Designer clothes are massively popular, as are flashy cars and you’re out of date if vou don’t change your sunglasses at least three times a year. Plastic surgery is linked to this. People realise that cosmetic surgery can be done safely- when a certified surgeon performs it, it’s simply a tool through which you can customise your appearance. Why is it big here? I think anywhere that there is an emerging market or extreme wealth you will have a big emphasis on the body. If someone can afford to have a tummy tuck, they will.”

What brought you into this line of work?
“I’m afraid it’s not a terribly romantic notion. I was a single child and my parents, being war babies from Europe had the idea that they wanted their son to be a doctor. Unfortunately, I wanted to pursue a career in movie making or fashion design because I had a very artistic streak. At the age of 13 I saw a BBC documentary about plastic surgery and it seemed like the perfect synthesis between art and science, hence the solution to my dilemma. I went to medical school and tried my hand at the general surgery route of gunshot wounds and trauma, but always in the back of my mind I was aspiring to follow a career in cosmetic surgery. I still get to be artistic, albeit in a limited way.”

You’ve been involved in a lot of television work, most notably The Swan , FOX’S plastic surgery series. What do you hope to achieve from this?
“It’s pretty simple really. I was given the chance to be on The Swan , and it was a great opportunity. Plastic surgery is a very competitive field and the practice of cosmetic medicine has evolved almost to the point that it has become a public spectacle. These days you’re almost conspicuous bv your absence. While I’d had TV exposure it was more through news programmes and I’d realised that being low-key might actually speak volumes, so when I was offered the opportunity to appear on The Swan I saw it as an opening to showcase my talents. My point was also not to become a spectacle, but to spread awareness about my work. Among the many benefits of such a break it turbo-charged my practise.”

In regards to the show, there has been a lot of controversy surrounding the recent epidemic of plastic surgery reality programmes and many critics have suggested that the strong emphasis on physical beauty puts out a negative message. How do you feel about this?
“I think if you strip away the Hollywood schmaltz behind the show you have a relatively benign and positive message, certainly a lot more than programmes like CSI or ER where you’ve got gunshot wounds and violence. The whole premise of The Swan is to show women taking charge of their lives and empowering themselves. Admittedly I was a little bit wary of the pageant aspect of the show, but after speaking to the contestants myself, I found that for them one of the most exciting parts of the whole programme was the competition aspect. Many felt it was the most liberating thing to ever happen to them. Having always been considered as average or below average in terms of looks and achievement, this was their time to say to friends, family, colleagues and even enemies, ‘Look at what I’ve achieved’.”

What are some of the positive aspects of the show?
“Some of the girls went on to get married, others made a break from negative relationships and some even went on to form charities. These are achievements that our society views as positive.”

As a celebrity plastic surgeon, do you feel you could perhaps be losing credibility in your field?
“Anytime you’re treading in the Hollywood arena, it’s possible to be intoxicated by the glamour. This can lead you to lose sight of why you’re there in the first place and that’s because you’re a surgeon. I think for some, it becomes difficult to know the distinction between being an actor and being a surgeon and that is something I’ve always tried hard to avoid. I realised early on that after the cameras have gone, I still have to put my key in the ignition, drive to work and practise – it’s what got me here in the first place. I try to maintain a sense of credibility and a dedication to my field. If you do that, you can’t go wrong.”

What are your hopes for the future?
“I’ve got a lot of things in the pipeline. I’m currendy developing my own skincare line, which is an anti-ageing range specifically designed for over-40s and I’m considering opportunities in this part of the world. On top of that there are various projects and development in my LA practice, so you could say I’ve got my hands full right now.” 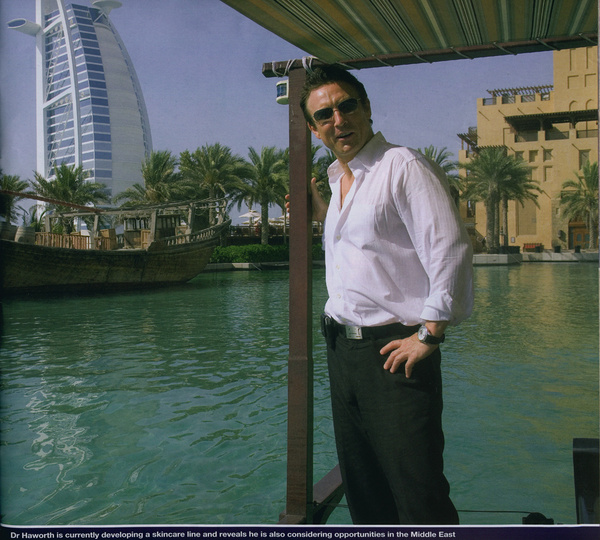