Beverly Hills plastic surgeon Dr. Randal Haworth offers his expert opinion on whether Jennifer Hawkins has gone under the knife. She has been the subject of ongoing surgery speculation due to her changing appearance over the years. Dr. Haworth told Daily Mail Australia on Tuesday: ‘I often see pretty girls like Jennifer wanting to fine-tune their features to enter “supermodel” territory.’ 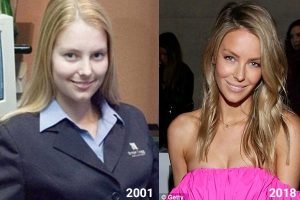 Despite being a household name for 15 years, Jennifer does not appear to have aged a day and is arguably more beautiful now than she was in her early twenties. Dr. Haworth, who has not treated Jennifer himself, stated that the Australian model appears to have invested in some minor improvements to ‘improve facial balance as a whole’. In 2010, Jennifer attributed her drastic change in appearance to healthy eating, exercise and makeup during an interview with The Kyle and Jackie O Show.

While old photos of Jennifer reveal a noticeably thinner pout and fuller face, she has previously brushed off surgery speculation. Jennifer once told The Australian Women’s Weekly that it’s the nature of the fashion industry to be accused of undergoing cosmetic surgery. ‘When someone says “under the knife” I don’t have a reaction,’ she told the magazine.