The Born To Try singer, Delta Goodrem, may have invested in some cosmetic tweaks over the years. Dr. Haworth told Daily Mail Australia on Monday he has a ‘strong hunch’ that Delta may have undergone a rhinoplasty, and may have also had filler injected into her cheeks and lips. The Beverly Hills plastic surgeon believes the tip of her nose is likely evidence that she has had cosmetic surgery. 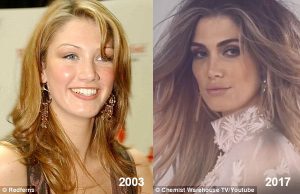 Dr. Haworth claimed: ‘Certain angles maybe more revealing than others, but I have a strong hunch she had undergone a rhinoplasty or nose job in the past because the shape of her tip is more demarcated from the rest of her nose while her bridge is noticeably narrowed.’ He also believes she may have indulged in some other non-surgical cosmetic procedures. ‘I find it apparent that both her cheekbones and her lips have been enhanced with a temporary filler, most likely of a hyaluronic acid variety such as Juvéderm or Restylane’ he told Daily Mail Australia.