Skip to content
Alex Perry, whose celebrity fans include Rihanna and Kim Kardashian, told Yahoo in 2013 that he is not ashamed of using fillers and Botox. In 2016, the Australia’s Next Top Model judge was criticized for his appearance by one of the show’s contestants, 21-year-old Kassidy Ure. After Alex criticized her photos, she sniped back: ‘At least my lips are real!’ 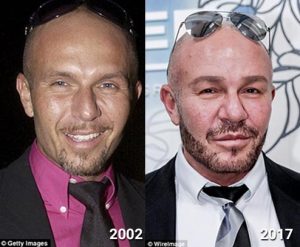 Beverly Hills plastic surgeon Dr. Randal Haworth accused the Australian fashion designer of ‘excessive’ use of anti-wrinkle injections. Haworth observed how Alex, 55, looks remarkably different in before and after photos and may have taken things too far. The Beverly Hills surgeon-to-the-stars claimed Alex’s face now looks ‘crowded’ as a result of ‘too much’ filler. Dr. Haworth stated that ‘Compared to his younger self, his face is now “crowded”, making his eyes appear smaller and closer set. Most likely, a generous recipe of injected filler and more than a drizzle of Botox in and around his forehead, brows and temples contributed to this look.’ Original Article