Before & After - Gallery - Lips 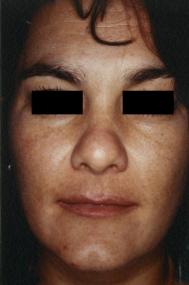 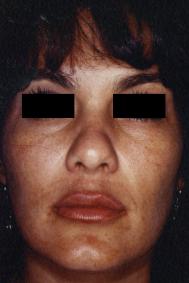 This young female was complaining of her "thin lips". The one of the world's number one experts in Lip reshaping surgery, Dr. Randal Haworth realized that she had inverted Vermilion, that is the red portion of her lips were turning inwards rather than outwards. Consequently, were a practitioner simply to add volume to her upper and lower lips, the full effect of that procedure would not be realized. The result would often be a tight unnatural appearing lip that would fall short of the patient's desired goals.

Dr. Randall Haworth then performed his signature FATMA surgery which stands for FAt Transfer and Mucosal Advancement. Basically, tissue rearrangement in the form of strategically placed V-Y plasties (three on the inside of the upper lip and one on the lower) are carried out in the same sitting that fat is transferred to the upper and lower lips. By performing both simultaneously, the results are synergistic. Results are not only impressive, giving a natural balanced look, but also permanent, soley utilizing the patient's own tissue. Nothing artificial is employed. Significant swelling persists for about two weeks.

Dr. Randal Haworth, the premier lip augmentation specialist in Beverly Hills, wrote a landmark paper on his FATMA technique that was peer-reviewed and praised for finally offering a permanent, meaningful solution to thin, atrophic and inverted lips. Patients around the world are grateful for this. One-year photographs are presented here. Note the impressive eversion of the upper and lower lips resulting from the strategic mucosal advancement ( V-Y plasties).