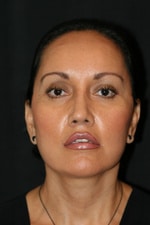 This middle-aged woman was referred to me by her husband after devoting much of her life to household chores and raising her children. Dr. Haworth, facelift expert Beverly Hills, realized that she had a glamorous sophistication hidden underneath her aging face. She had tired eyes (mostly contributed by her sagging eyebrows), tired lower eyes with hollows, a drooping midface, jowls, a flaccid neck and a sad, worn out lip region. After careful analysis and discussion with herself and her husband, Dr. Randal Haworth, being a Beverly Hills facelift specialist, suggested an endoscopic brow lift, a lower blepharoplasty with fhat transfer, a facelift, and upper and corner lip lift along with a lower V-Y plasty. She also had obvious signs of having undergone a previous rhinoplasty. It had not aged well and had somewhat of a pinched tip appearance. 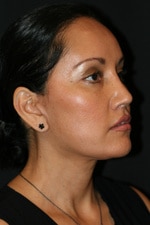 As a specialist in facelifts, lip reshaping surgery and revision rhinoplasty in Beverly Hills, Dr. Randal Haworth performed a facelift (rhytidoplasty), an endoscopic brow lift through four discrete, small incisions behind the hairline (without shaving) with the use of a camera and special instruments, a lower blepharoplasty, upper and corner lip lifts along with a V-Y plasty to raise and pout out the central third of her lower lip(Helping to hide her visible lower teeth) as well as a revision rhinoplasty. He performed the revision rhinoplasty (nose job) utilizing cartilage grafts in the nose and advanced suturing techniques along with hump production through an open approach. Dr Haworth performes his signature necklift (an extensively modified version of a corset platysma plasty along with skin redraping) normally in conjunction with a facelift (which is one of the most dramatic types of the neck lifts obtainable in United States). 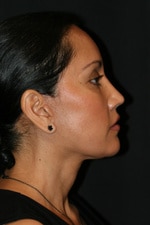 Nine-month follow-up photographs are presented here. The patient was exceedingly satisfied with the results feeling she just attained a new lease on life, looks and self confidence, that she thought heretofore impossible to regain. As the old saying goes, "everybody will notice, nobody will know".