Dissimulate he had undergone a previous rhinoplasty several years back and has gradually developed a twisted, pinched tip with simultaneous nasal obstruction. Dr. HAWORTH, a revision rhinoplasty expert in Beverly Hills for correction of the same. Through an "open" rhinoplasty technique, her thin-skin was separated from the underlying cartilage and bone to expose the underlying reason for her deformity. Utilizing auricular(ear) cartilage grafts as well as cartilage from her remaining septum, her tip was reconstructed and strengthened and reshaped. While improving her breathing, her appearance also benefited as well. Finally, her nasal bones were infractured to create a pleasing and symmetrical brow-tip curvilinear line. By controlling light and shadow during this revision rhinoplasty, a natural chic aesthetically pleasing result was obtained that balanced beautifully with the rest of her facial features. 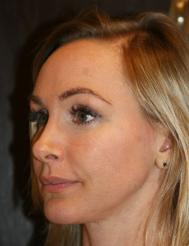 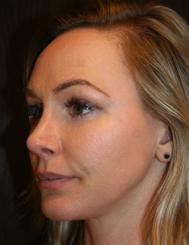 The cast was removed at day seven as well as sutures. These results represent the third month after the operation.